Review: Get Him to the Greek 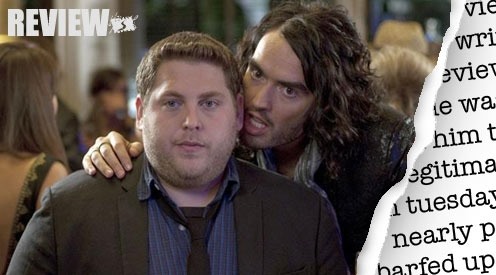 It's not quite Pixar-like, Judd Apatow's streak of very funny, very good films, but it's close. As a producer, he's as close as it gets to Mr. Automatic, going from Anchorman: The Legend of Ron Burgundy to The 40-Year-Old Virgin to Talladega Nights to Superbad to Pineapple Express with only a couple Year One's and Walk Hard's to queer the run.

Apatow's done it the right way, by surrounding himself with a gang of truly funny people and by recognizing what a lot of timid, gloss-obsessed Hollywood folks won't: that guys like Jonah Hill, Michael Cera, Steve Carell and Seth Rogan could carry pictures. They're all... these are odd-looking dudes, these Apatowian fellas, and it's hard to make them look good blown up billboard size. But all of them can write their own jokes, all of them are funny, and as Hill proves in the new Get Him to the Greek, all of them can carry the weight of a big film on their back, despite their schlubbiness, despite the films not being SNL spin-offs. There's just talent and comedy, that's both fresh and charmingly old-fashioned.

With Get Him to the Greek there's a weird bit of Hollywood story/actor oddness that evaporates as soon as the picture gets rolling: writer/director Nicholas Stoller is taking characters from a previous film that he directed (that was written by and starred Jason Segel), Forgetting Sarah Marshall, keeping one intact (Russel Brand's rock god Aldous Snow) and slightly tweaking one other (Jonah Hill's disturbed-fan maître d' becomes a shy music intern), and sets them loose in a completely unconnected narrative.

Snow is the last true rockstar, recently fallen hard off the wagon post-a disastrous, career-threatening single about starvation in Africa called "African Child". Worried about slumping record sales and a label-head (the surprisingly entertaining Sean "Diddy" Combs) looking for "the next thing", intern Aaron Green (Hill) suggests the company return to its rock roots and sponsor a gig at the Greek theatre in L.A., to mark the 10th anniversary of a legendary Aldous Snow show. Green is sent to London to collect him, packing an adrenaline shot and instructions to do whatever it takes to get the slippery, deluded, hard-partying rock god to L.A. in three days. Very funny hijinks ensue.
Brand as Snow is the spectacle, the wild spark that animates the whole film. Snow vacillates wildly from petulant artistic preciousness to aggressive junkie posturing to anarchic drug logic and back. Story-wise, tt's a dangerous thing to chance, as the rock-excess thing has been parodied to near-death. Brand, though, limns the edges of his chaos with occasional moments of human frailty. The film notes late in the going that Snow's self-appointed rock messiah is intelligent, and it's a small ignorable moment that speaks to the subtle bits of originality in the film's script and in Brand's performance: he's a pompous idiotic waster in true rock fashion, but there's a cruel, manipulative intelligence underneath it all that helps the whole film feel fresh and funny, even if it's going over well-trod Spinal Tap ground.
The discovery of the film, though, is Jonah Hill as Aaron Green, the spectacular punching bag at the heart of a film that mercilessly visits every kind of humiliation and degradation on him. He stands square in the furnace blast of Snow's rock-superstar excess and the shrivelling, repeated "mind f__ks" of his conniving, unbalanced boss: he pukes, he's sexually assaulted by more than one person, he's threatened, cursed, party to a stabbing. But what makes Hill's performance truly funny is that while he is in essence a nebbish, a victim, a barf-coated ill-looking cannonball of a man he nonetheless retains a really kind of compelling dignity and oddly endearing self-confidence. There's a depth to Hill's performance in this film (and in Forgetting Sarah Marshall as well) that's actually… special. He's not an oversize wild-man, he's not a tiny Michael Cera-esque mumbler. He's doing something new, and it along with everything else in this film is very very funny. 8/10

Want to master Microsoft Excel and take your work-from-home job prospects to the next level? Jump-start your career with our Premium A-to-Z Microsoft Excel Training Bundle from the new Gadget Hacks Shop and get lifetime access to more than 40 hours of Basic to Advanced instruction on functions, formula, tools, and more.

Other worthwhile deals to check out:

Join the Next Reality AR Community

Get the latest in AR — delivered straight to your inbox.

Rarely have I been so excited to see a film. Great review.